Agouti Paca – quatusa : Locally known as a gibnut. A 20- inch tail-less rodent with small ears and a large muzzle. Its redish brown on Guatemalans pacific side, more tawny orange on the Belize Caribbean slope. Sits on haunches to eat large seeds and fruit. Nocturnal by habit and highly prized as food item by many Belizeans, the gibnut is more apt to be seen by the visitor on an occasional restaurant menu than in the wild. Also known as ëThe Royal Ratí as it was served to Queen Elizabeth on her last visit to Belize.

Anteater – oso hormiquero : Three species area found here, the giant Myermecophaga tridactyla, silky Cyclopes didactylus and collared, or vested Tamandya mexicana; only the latter is commonly seen (and too often as a road kill). This medium-size anteater (30 inches long with 18 inch tail) is seen lapping up ants and termites with long sticky tongue; has long sharp claws for ripping into insects nests.

Aracaris – cusingo : Slender toucans, with a trademark bill, travel in groups of six or more and eat ripe fruit.

Coati – pizote : A long nosed member of the raccoon family. The Coati- also known as Quash-has a long, ringed tail, masked face, and lengthy snout. Omnivorous, the Coati also relishes jungle fruits. Usually seen in small troops traveling in single file with the tail pointed strait up. The occasional solitary male is referred to as a coati-mundi.

Cougar – puma ; Felis concolor : Mountain lions are the largest unspotted cats. A large feline predator. (to 5 ft, with 3 [1//2]-inch tail) Widespread in Belize and Guatemala but rare, they occur in essentially all wild habitats and feed on vertebrates ranging from snakes to deer. Belizean and Guatemalan cultures refer to any wild cat as a Tiger.

Crocodile – laqarto ; Crocodylus acutus : Mayan word ëLamanaií means submerged crocodile. Though often referred to as alligators, Belize have only crocodiles, the American (up to 20 feet) and Moreletís (to 8 feet) – Crocodylus moreleti. Fussie about their cuisine, preferring fish, dogs, and other small mammals to people. The territories of both species overlap in estuaries and brackish coastal waters. Able to filter excess salt from its system, only the American crocodile ventures to the more distant cayes. Endangered throughout their ranges, both crocs are protected by international law.

Ctenosaur – garrobo ; Ctenosaura similis : A.k.a. black, or spiny, iguana. Large (to 18 inches long with 18-inch tail), tan lizard with four dark bands on body and a tail ringed with rows of sharp, curved spines. Terrestrial and arboreal, it sleeps in burrows or tree hollows. Though mostly vegetarian, it consumes small creatures. Seen along both coasts and cayes. Creo name is ëWish Willyí and is eaten by locals.

Dolphin – delfin : Several species, including bottlenose dolphins Tursiops truncatus, frolic in Belizean and Guatemalan waters. Frequently observed off Pacific shores of Guatemala are spotted dolphins Stenella attenuata, which are small (to 6 ft.), with pale spots on posterior half of body; they often travel in groups of 20 or more and play in bow wakes and around vessels.

Eagle Ray – Aetobatus narinari : The Spotted Eagle Ray, One of the Caribbeanís most graceful swimmers. Common throughout the range. Sizes range from 6 to 8 ft., White underside. Numerous white spots and circular markings over dark back. Pronounced head with flattened, tapered snout. Long thin black tail with one to five venomous spines at base. Swims at depths of 6 to 80 ft. Cruising sandy areas occasionally stopping to dig for mollusks, upon which they feed.

Frigatebird – Fregat magnificens: Large, black, soaring bird with slender wings and forked tail; one of the most effortless and agile fliers of the avian world. Doesnít dive or swim instead swoops to pluck food from surface, or more commonly steals catch from the mouths of other birds.

Frog – rana : Belize and Guatemala have numerous frogs and also toads, but the most dazzling is the red-eyed tree frog, whose ruby gelatinous eyes are like night beacons in the jungle. This frog attaches firmly to green leafs with rubbery, neon-orange hands and feet, its eyes bulge out from its metallic green body, which is splashed with white dots and blue patches.

Fer-de-Lance – Bothrops asper : This, one of the largest, commonest, and by far the most dangerous of all pit vipers, has a host of names in Belize and Guatemala. Known as ëTommygoffí in Belize and ëTomagasseí in Guatemala . This aggressive snake can grow to 8ft. in length and has bright yellow sides to its head.

Howler Monkeys – mono congo ; Alouatta palliata : These dark, chunky-bodied monkeys (to 22 inches long and 24-inch tail) with black faces travel in troops of 20 or more. Lethargic mammals, they eat leaves, fruits, and flowers. The deep, resounding howls by males serve as communication among and between troops. These Monkeys(erroneously termed Baboons by Belizeans) travel only from tree to tree limiting there presence to dense jungle canopy.

Iguana – iguana : Largest lizard in Belize and Guatemala; males can grow to 10 feet, including tail. They are mostly arboreal and good swimmers. Only young green iguanas Iguana iguana are bright green; adults are much duller; females dark grayish; males olive (with orangish to red heads in breeding season). All have characteristic round cheek scale and smooth tails. A delicacy with the locals who call it ëBamboo Chickení. Also Ctenosaura similis a.k.a. black or spiny, iguana. Large (18-inch tail), tan lizard with four dark bands on body and a tail ringed with rows of sharp curved spines. Terrestrial and arboreal, it sleeps in burrows of tree hollows. Though mostly vegetarian, it consumes small creatures. Seen along both coasts in the dry north and in wetter areas farther south.

Northern Jacana – gallito de aqua ; Jacana spinosa : These birds are sometimes refereed to as “Lilly trotters” because there long toes allow them to walk on floating vegetation. They eat aquatic organisms and plants and are found at any body of water. Expose yellow wing feathers in . ëLiberatedí females lay eggs in several nests built by the multiple male mates who tend, hatch and raise chicks.

Kinkajou – martilla ; Potos flavus : a nocturnal, arboreal relative of raccoon with light brown fur (to 20 inches, with 20-inch prehensile tail). Actively and often noisily forages for fruit, insects, and some nectar. Has yellow-green eyeshine. Its image appears on the Belizean twenty dollar note.

Leaf-Cutter Ant – zompopas ; Atta : In creo its refereed to as ëWee Wee Antí. Most commonly noticed neotropical ants, found in all lowland habitats. Columns, sometimes extending for several hundred yards from underground nest to plants being harvested, leave a distinct path though the jungle. The clipped leaves are fed to cultivated fungus that they eat.

Macaw – lapas – Ara macao Only one species of Macaw is found in Belize and Guatemala, the Scarlet Macaw. The population is severely threatened and listed endangered. Huge, raucous parrots with long scarlet tails; immense bills used to rip apart fruits to get to seeds. Nest in hollow trees. Victims of pet trade poachers and deforestation.

Magpie Jay – urraca ; Calocitta formosa : This southern relative of the blue jay, with long tail and distinctive topknot (crest of forwardly curved feathers) , does not occur in Belize and only along Guatemalans pacific slope. Omnivorous, bold and inquisitive, with amazingly varied vocalizations, these birds travel in noisy groups of four or more.

Manatee – Tricherus manatus: The manatee is an elephantine creature of immense proportions with gentle manners and the curiosity of a kitten. This enormous animal, often called the sea cow, is scarce today. The manatee is said to be the basis of myths and old seamenís references to mermaids. In South America certain indigenous tribes revere this particular mammal. The Maya hunted the manatee for its flesh, and its image frequently appears in ancient Mayan art.

Morpho – morfo: Spectacular big butterfly. Three species have brilliant-blue wing upper surface, one of which Morpho peleides is common in moister areas; one has intense ultraviolet upper surface; one is white above and below; and one is white and brown. Adults feed on rotting fallen fruit (Never visit flowers). 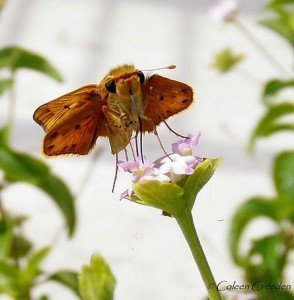 Oropendola – oropendola; Psarocolius: Crow-sized bird in oriole family with bright yellow tail. Nests in colonies in isolated trees in pendulous nests (up to 6 ft. long) built by females. Males make unmistakable, loud, gurgling liquid call. They are fairly omnivorous, eating much fruit, and much more numerous on Caribbean side.

Parakeet and Parrot – Pericos; parakeets; loros; parrots: Prerequisites of any tropical setting. All are clad in green (virtually disappearing upon landing in trees), and most with a splash a of a primary color or two on head or wings. They travel in a boisterous flocks, prey or immature seeds, and nest in cavities.

Quetzal – quetzal: One of the worldís most exquisite birds. Resplendent quetzals Pharomachrus mocinno were revered as sacred by Mayas. Glittering green plumage and long tail coverts of male quetzal where used in ceremonial costume and headdress The national bird of Guatemala. Now extinct in Belize but can be found in the Guatemala Government Quetzal sanctuary near the city of Coban.

Roseate Spoonbill – garza rosada; Ajaia ajaja: Pink plumage and spatulate bill set this wader apart from all other wetland birds; feeds by swishing back and forth in water while using feet to stir up bottom-dwelling creatures.

Sea Turtle – Sea turtles come in three varieties: green, Chelonia mydas, hawksbill – Eretmochelys imbricata, and loggerhead – Staurotypus triporcatus. All have paddle like flippers instead of feet. As well adapted to the oceans as they are still have to surface to breathe.

Sloth – perezoso: Bradypus variegatus and Hoffmanís two-toed sloth Choloepus hoffmanni; both grow to 2 ft, but two-toed (check forelegs) often looks bigger due to longer fur, and is only on in the highlands. Completely vegetarian; marvelously adapted to low-energy diet; well camouflaged.

Tapir – danta; Tapirus bairdii: The national animal of Belize. It is stout-bodied, with short legs, a short tail, and small eyes. Know in creo as the mountain cow, has adapted to a wide range of habitats but is nocturnal and seldom seen. Completely vegetarian; prehensile snout used for harvesting vegetation. They bathe daily and lives near streams and lakes in forest.

Toucan – Tucan, tucancillo: recognizable to all whoíve ever seen a box of Fruit Loops. Belize and Guatemala have several species including the aracaris. Keel-billed Ramphastos sulfuratus and chesnut-mandibled toucans Rampahstos swainsonii are the largest (18 inches and 22 inches respectively), black with bright yellow “bibs” and multihued bills. The much smaller and stouter emerald toucanet Aulacorhynchus prasinus and yellows-eared toucanet Selenidera spectabilisare aptly named. All eat fruit, but also some animal matter, and nest in cavities.

Whale – ballenas: Humback whale Megaptera novaenglia most likely seen off Pacific coast between November and February; migrates from California and as far as Hawaii.

Vampire Bat – Desmodus rotundus – Bats are the only mammal capable of true . The body is furry and mouse like. The Vampire Bat feeds on the blood of living animals chiefly other mammals. In Creole its known as the ëRat Batí.